ZEE5 launches KHAAR, a docudrama on the iconic Dandi March 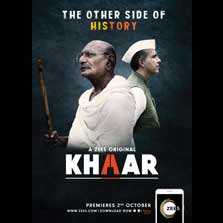 After the success of recent originals like Karenjit Kaur – The Untold Story of Sunny Leone, Lockdown, Akoori, Lal Bahadur Shastri's Death - An Unfinished Story among others, ZEE5 - India's largest and most comprehensive digital entertainment platform for language content is set to stream Khaar. A docudrama on Mahatma Gandhi's significant Dandi March to Dandi, Khaar will premiere on 2nd October exclusively on ZEE5.
Watch the trailer here: https://www.youtube.com/embed/3leALluEC0w

While a lot has been said about Mahatma Gandhi's contribution to India's independence, not too many people know that he often had to face opposition even from his close aides from the Indian National Congress. The idea for the salt satyagraha had been his brain child and one that changed the course of our independence struggle; yet it didn't have the popular support within the Congress. But, Gandhiji pressed on with the belief that he was on the right path. Khaar unfolds the many challenges that Gandhiji faced before initiating the Dandi March and triggering the most dramatic chain of events that led to India's independence.
The docudrama features Surendra Rajan as Mahatma Gandhi, Sanjay Gurbaxani as Nehru, Amit Singh Thakur as Sardar Vallabhbhai Patel, Tarakesh Chauhan as Maulana Azad.  To give the audience an immersive experience, the show has Annu Kapoor lending his voice as a narrator.

Commenting on his association with ZEE5 and as the narrator of Khaar, Annu Kapoor said, “The Dandi March initiated by Gandhiji was an iconic movement against the British and a milestone in India's movement for freedom. Today's youth are hardly aware of the real story behind the movement and what better than a digital medium like ZEE5 to reach out to them with the truth behind the mission. I am extremely proud to lend my voice to this docudrama and thankful to ZEE5 for taking the initiative to recreate the story in an engaging way.”

Manish Aggarwal, Business Head, ZEE5 India commented, “We take pride in announcing Khaar as our latest offering to the audience on Gandhi Jayanti. Docudramas have been well received on the platform, we launched Lal Bahadur Shastri's Death - An Unfinished Story on Independence Day and Khaar is another effort in that direction. The well-researched story dives deeper into the other side of history and Gandhiji's ideology, with a gripping storyline backed by Annu Kapoor's spellbinding narration. We are certain that Khaar will not only entertain audiences but also give them an opportunity to learn about unknown facts of the Dandi March.”


With over 3500 films, 500+ TV shows, 4000+ music videos, 35+ theatre plays and 90+ LIVE TV Channels across 12 languages, ZEE5 truly presents a blend of unrivalled content offering for its viewers across the nation and worldwide. With ZEE5, the global content of Zindagi as a brand, which was widely appreciated across the country, has also been brought back for its loyal viewers.