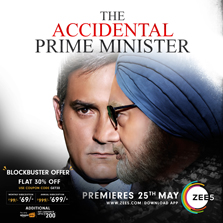 Directorial debut of film maker Vijay Ratnakar Gutte and based on the 2014 memoir by Sanjaya Baru, political commentator and media Advisor to the Prime Minister, The Accidental Prime Minister discovers the tenure of Manmohan Singh as the Prime Minister of India. The movie also stars Suzanne Bernert, Aahana Kumra and Arjun Mathur among others.

Aparna Acharekar, Programming Head, ZEE5 India said, "A good acquired content library is vital for a complete experience for ZEE5 subscribers. We at ZEE5 are not confined to just the marquee movies but also believe to give the audience unlimited entertainment choices from the new release catalogue. We will continue adding latest movies on the platform and with the digital premiere of The Accidental Prime Minister, we hope our audience will have lots to binge watch over this weekend."

Vijay Ratnakar Gutte, Director, The Accidental Prime Minister commented, “We are delighted that ZEE5 will be hosting the digital premiere of The Accidental Prime Minister as they have knack for quality content. The film is a story of one of the most powerful personalities in India and remarkable performances by actors Anupam Kher and Akshaye Khanna, are worth watching. The movie has been well received in the theatres and with the digital premiere, we hope it will be enjoyed by a wider audience globally."

Sharing his excitement, Anupam Kher said, “The Accidental Prime Minister is a tale of a man who manages the integrity of the chair despite the political chaos around. It took immense research and practice to essay the role of a person who does not express much. The film earned appreciation from audiences when it released in cinemas and now that it will premiere on ZEE5 it will travel far and beyond."

From URI- The Surgical Strike, Simmba, Sonchiriya, PADMAN, Veere Di Wedding, Mulk, Parmanu and many more in Hindi to Faster Fene, Gulabjaam, Mercury and so on in Marathi and Tamil respectively, ZEE5 continues to digitally premiere blockbuster movies across languages.

With over 3500 films, 500+ TV shows, 4000+ music videos, 35+ theatre plays and 90+ LIVE TV Channels across 12 languages, ZEE5 truly presents a blend of unrivalled content offering for its viewers across the nation and worldwide. With ZEE5, the global content of Zindagi as a brand, which was widely appreciated across the country, has also been brought back for its loyal viewers.

Pricing: Freemium pricing model with both free and paid premium content (including Originals) to cater to a mix of audiences. Viewers who subscribe to the ZEE5 subscription pack will get access to the entire library of content with – 99/- for 1 month and 999/- for a year. Subscribe to ZEE5 and avail the blockbuster offer – Flat 30% off (coupon code GET30) - offer valid till 10th June 2019 and additional cashback on Amazon Pay upto Rs. 200.