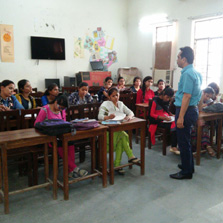 Dr. Ambrish Saxena, Academic Head, ZIMA and ZICA, conducted a Workshop on Social Media at Aditi Mahavidyalaya of Delhi University on March 30. The participants included undergraduate students studying journalism in this prestigious girls' institution in the outskirts of the national capital.


Underlying the distinction between conventional media and new media, Dr. Saxena explained how online media has transformed the very concept of mass communication and revolutionised mass media in this era of change. Communication at the grass root through alternative media has contributed significantly to the empowerment of the deprived.

Dr. Saxena said that the internet has proved an effective tool in the hands of common people for content generation and dissemination of information to the desired target group, mostly their own group created by them only. Thus, one sided communication is moving towards its end, and it is gradually being replaced by participatory communication based on exchange or sharing of information.


Dr. Saxena alerted the students to the dark side associated with cyber media usage, and asked them to exploit this new instrument for the betterment of society without attaching ulterior motives to the technology. He added that most of the media available on the internet platform is inadequately regulated, so the policymakers and enforcement machinery are under obligation to take necessary measures for keeping a check on any misuse.


Dr. Saxena apprised the students of the latest trends in journalism, and the avenues that ZIMA and ZICA have opened to young media aspirants. The students were quite receptive and responsive during the session. Dr. Mala Misra, Associate Professor at Aditi Mahavidyalaya, extended the vote of thanks.


Report By: Team - ZIMA Noida
Mail your feedback at: esselnewsletter@zee.esselgroup.com