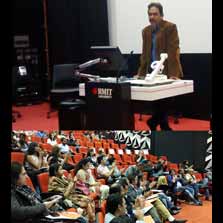 The Academic Head of Zee Institute of Media Arts (ZIMA) and Zee Institute of Creative Arts (ZICA), Dr. Ambrish Saxena addressed the Indian Film Conference and Festival, organised by the Centre for Communication, Politics and Culture (CPC), RMIT University, Melbourne, Australia, during the first week of December and had academic discourses with media professionals in Sydney during the second week of this month. The four-day conference and festival was organised in Melbourne at the initiative of Dr. Vikrant Kishore, lecturer in Communication and Media Production at RMIT University.

Dr. Saxena delivered a talk on "Male gaze versus women identity in Hindi films" in the Plenary Session of the conference. He talked about various issues related to women empowerment and women liberation while making a comparative analysis of the recently released films PINK and PARCHED. The session was chaired by Prof. Antonio Castillo, Director of CPC and was moderated by Dr. Vikrant Kishore.


Dr. Saxena was a distinguished guest at the valedictory sessions of the Conference and the Festival. Other eminent personalities who shared the dais with him included actor Vipin Sharma of Taare Zameen Par fame, Pink scriptwriter Ritesh Shah and celebrated film actor Vishwajeet Pradhan.

Following the Conference and Festival in Melbourne, Dr. Saxena then proceeded to Sydney to have meetings with media scholars and professionals on issues of academic importance.


Report By: Team - ZIMA & ZICA
Mail your feedback at: esselnewsletter@zee.esselgroup.com