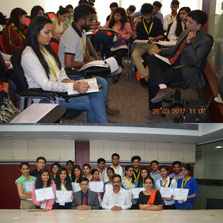 Students with beaming faces and oozing energy gathered at Zee Institute of Media Arts (ZIMA) Noida on Sunday March 26 for a day-long Workshop on Basic Anchoring. Notably, the workshop registered the presence of thirty students from five states (UP, Bihar, Rajasthan, Haryana and Delhi) and 10 institutions.


Mr. Athar Saeed, a senior radio and TV anchor, conducted this workshop which covered the basics of anchoring, particularly pronunciation and diction in Hindi and Urdu. The students were told about the dos and don'ts of scripting and anchoring.


The workshop participants were given practical training in anchoring when they were asked to prepare a script and read it in front of the mike. In the process, they were told how to handle the mike in anchoring.


The 'Basic Anchoring Workshop' was the seventh workshop in the series of one-day skill oriented workshops organised in Noida during February and March. Such workshops are part of ZIMA's endeavour to conduct workshops for the skill-enhancement of budding media professionals.


In February itself, ZIMA organised four workshops. The first in the series was Video Production Workshop, conducted by Dr. Vikrant Kishore, Filmmaker and academic from RMIT University, Melbourne, Australia, on February 14, 2017. The second workshop on Documentary Filmmaking was conducted by Mr. Aditya Seth, a renowned documentary filmmaker from Mumbai, on February 19, 2017. The third workshop on Script Writing (News) was conducted by Ms. Alokananda Sen Awasthi, a senior broadcast journalist on February 24; and the fourth one was on Script Writing (Film) conducted by Mr. Subhash Chaturvedi, senior scriptwriter from Mumbai, on  February 25, 2017.

In the month of March, the first workshop was on TV News Reporting which was again conducted by Ms. Alokananda Sen Awasthi on March 4, 2017. The second workshop of this month was conducted by Mr. Vibhanshu Vaibhav, eminent writer, director and actor from Mumbai, on Acting, on March 8, 2017.


Dr. Ambrish Saxena, Academic Head of ZIMA and ZICA, introduced Mr. Saeed to the students and welcomed him at ZIMA. Ms. Deepa Zutshi, senior faculty, expressed gratitude to him for imparting desired skills to the students while Ms. Lakhvinder Kaur, counsellor, told the students about different avenues available at ZIMA.


Report By: Team - ZIMA Noida
Mail your feedback at: esselnewsletter@zee.esselgroup.com