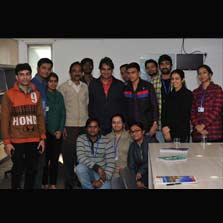 "Vigilance and perseverance is a must for budding journalists", said Mr. Sudhir Chaudhary, Editor and Business Head of Zee News, while interacting with the journalism students of Zee Institute of Media Arts (ZIMA) in the Noida premises on December 13. He asked the students to develop the habit of reading and to remain updated by keeping a track of news and current affairs both on the domestic and international fronts.


During an intense interaction, Mr. Chaudhary, an IIMC graduate of 1990s, called upon the students to choose their own path instead of following the trend. He asked them to recognise their potential and harness their capabilities in the focussed area of diversified journalism. He emphasised on being bilingual, especially having a good command over Hindi and English, keeping in view the requirements of the news industry.


Narrating his varied experience in the field of TV journalism, Mr. Chaudhary motivated the students to be ready to take up challenges. He quenched the thirst of would-be journalists by telling them the stories of his reporting assignments and the shows anchored by him. The students aptly listened to this doyen of journalism and kept raising their queries.


Following the session, the beaming students surrounded him for selfies and getting photographs clicked with him. Marisha Srivastava, student of TV Journalism, said that the interaction with Mr. Chaudhary was a life-time experience while Neha Vashisth, student of Anchoring, said that it was like picking up a few drops from the ocean.