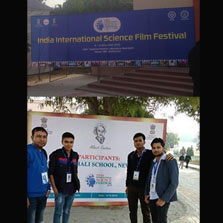 The students of Zee Institute of Media Arts (ZIMA), Noida, availed the unique opportunity of participating in the India International Science Film Festival 2016, organised by the Ministry of Science & Technology and the Ministry of Earth Sciences, Government of India, at National Physical Laboratory near Pusa in New Delhi for four days i.e. December 8 to 11. The festival showcased documentaries on science and related topics from India as well as other countries from different parts of the world.

The students of ZIMA Noida actively participated in the film festival by getting themselves involved in discussions on the screened films. They were even part of the science filmmaking workshop. Dr. Ambrish Saxena, Academic Head of ZIMA and ZICA, Ms. Deepa Zutshi, senior faculty and Ms. Lakhvinder Kaur, Counsellor, remained there for providing necessary guidance to the students.


The first day of the event started off with screening of Inaugural Films from Israel and India. Three films were showcased in this inaugural session (out of which 2 were from Israel and 1 was from India): "Israel Space Agency", "Ministry of Science, Technology & Space" and "3.6 Meter Devasthal Optical Telescope- Reaching for stars". It was then followed by screening of 2 documentaries by Dr. Mike Pandey, veteran science film-maker and interactive session with him namely: "Timeless Traveller - The Horseshoe Crab” (A national award winning film) and "The Vanishing Vultures". Post lunch session was dedicated to the screening of Indian competitive (Category-B) films made by students and amateurs.


The second day began with the screening of foreign film "Weapons of Mass Destruction" produced and directed by Bestor Cram, Northern Lights Production, Boston, US, with brief remarks by the film makers. It was followed by an interactive session and a workshop "Science Communication through films" by Prof. Iftekhar Ahmed, Director of AJK Mass Communication Research centre. Post lunch session was dedicated to the screening of competitive films made by professional film makers (category-A) with brief remarks by the film-maker.

The third day started with screening of Indian Competitive (Category-A) films made by professional filmmakers with brief remarks by the film makers. It was immediately followed by the screening of foreign films with brief remarks by the film makers. This was followed by a panel discussion on "Science films-effective tool of Science Communication". It was moderated by Mr. K.G Suresh, Director General, IIMC, and the panellists included:

The last day of the festival began with the screening of the foreign Film "Racing Extinction" directed by Louie Psihoyos-USA with brief remarks by the filmmaker. After the screening an Interactive session/workshop on Science Communication was conducted by Dr. Pradeep Srivastava, Former Scientist, CSIR-CDRI, Lucknow. It was followed by the screening of Indian Competitive Film-Category A, films made by the professional film makers with brief remarks by the filmmakers. The post-lunch session saw the end of the four-day long film festival by Valedictory Function and Award Ceremony.

Report By: Team - ZIMA
Mail your feedback at: esselnewsletter@zee.esselgroup.com