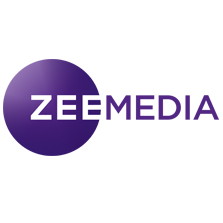 Zee Media Corporation Limited (ZMCL) (BSE: 532794, NSE: ZEEMEDIA) today reported consolidated revenues of Rs 2,006.6 mn for first quarter of fiscal 2020. The Network incurred expenditure of Rs 1,347.8 mn in the quarter. The Board of Directors, in its meeting held today, approved and took on record the financial results of ZMCL for the first quarter ended June 30, 2019.

Operating Highlights
The 14 news channels of ZMCL comprising 1 Global, 3 National and 10 Regional channels together continued to be one of the largest TV news networks in the country and reached more than 308 mn viewers. (Source: BARC, NCCS 2+, All India, ZMCL Channels, 24hrs, 1st Apr – 30th Jun 2019 Coverage)

During the quarter, the Network put in its entire might to provide comprehensive, visually appealing and highly analytical coverage of the most important event for the country in five years - the Lok Sabha Elections 2019. The entire network undertook the programming and coverage of the elections under the common branding of Abki Baar Kiski Sarkar and organised several conclaves across the country to provide a platform for contesting parties to discuss developments during last 5 years and their respective roadmaps for the future.

The channel organized India Ka DNA conclave to analyze and review the tenure of the current Government as well as the plan ahead for all parties for the General Elections. The event involved participation from key politicians across parties with BJP President Amit Shah as Chief Guest.

The channel continued to be a facilitator of dialogue between different nations and initiated WION World Order, a series of discussions between the ambassadors of various countries focusing on international issues concerning both India as well as their countries.

During the quarter, the channel shifted its focus to innovative associations with key constituents of the Indian economy, such as Super Mechanic Contest (Car & Bike Mechanics) and Khet Asanas (Yoga for Farmers).

In addition to the news making corporations of India Inc, the channel has always endeavoured to promote the SMEs of the country. The channel organised 40 boardroom breakfast forums titled Dare to Dream: Growth Matters across multiple cities along with support from relevant industry associations. During the forums, key stakeholders discussed Policies towards SMEs, Technology Facilitation, Market Linkages, and Business Support.

The channel organised Krushi Sanman to acknowledge and honour the heroes in the field of agriculture who have achieved extraordinary feats despite adversities.

ZEE PHH provided the platform Himachal Varta to various parties to contemplate on and to discuss the developmental strategies for the state.

The channel organised Election Conclaves in Bihar and Jharkhand to provide a clear picture of the respective states and the future plans of each of the parties to the viewers.

The channel organised Chunaav Vimarsh conclave to discuss and debate the thoughts of top political leaders from Rajasthan on the newly formed state government and the plans of various parties if they succeed in General Elections.

The channel organised Education Excellence Awards to felicitate and celebrate the success of prominent achievers in Gujarat's education sector.

Report By: Mayank Agarwal
Mail your feedback at: esselnewsletter@zee.esselgroup.com