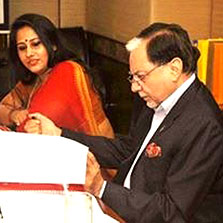 Dr. Subhash Chandra, Chairman, Essel Group & ZEE was a part of the esteemed jury of the Fempowerment Women Achievers' Awards 2014. An initiative by Molecule Communications (Mumbai and New York), the awards were held on August 28, 2014 at the Jamshed Bhabha Theatre, NCPA in Mumbai. The awards celebrated the worth and empowerment of women in India, honoring women across 14 categories including science, entrepreneurship, sports, art, education, corporate and entertainment and Special Recognition to a Man by Women.

Report By: Corporate Brand
Mail your feedback at: esselnewsletter@zeenetwork.com